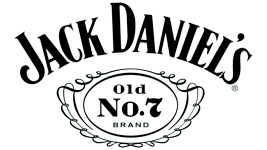 Jack Daniel's is a brand of whiskey belonging to the Tennessee whiskey category, mainly known for its bottle with a rectangular shape, also used as an essential ingredient in different cocktails. Since 2005 it has been distributed in Italy by the Campari group. Jack Daniel's is undoubtedly one of the most famous whiskey brands today. And, above all, it has been on the market for 150 years.

The name of whiskey comes from Jasper Newton "Jack" Daniel, who in 1875 founded his first distillery. He is an indigene of Tennessee, and the company was in full operation in the 19th century.

According to the story that Jack Daniel's brand tells, the distillery was created by the young apprentice mentioned above. He, by the way, would have learned the refined techniques of producing a beautiful whiskey based on American corn. The brand's great insight would have been the improvement of the distillery technique by Jack Daniel himself. And that has propelled it into the market since its founding in 1866. So, from then on, whiskey was all success. The distillery had been duly registered in the United States with headquarters in Lynchburg, Tennessee.

Several whisky approving bodies had concluded that the Jack Daniel's brand is the best-selling whisky in the world. One of them is VinePair. The reasons for the top rating include a variety of bottles (over 60 options to choose from) and tastes that suit the soul, comfort the taste bud, and have pleasant aromas. The whisky can be taken as it is or mixed with cocktails. The affordable pricing that matches the purse with no reduction in quality is another excellent reason.

The raw materials for the production of this unique brand include 90% corn from Indiana, Illinois, and Kentucky, 8% rye grown in Minnesota and the Dakotas, and 12% malted barley, sourced from Wisconsin. Jack Daniel owns the yeast used for fermentation. The nonferruginous water coming from springs located near the distillery is one of the most essential ingredients to influence the taste of the whiskey decisively.

To determine the overall taste of Jack Daniel's is the mash, which includes corn, rye, and malted barley. Unmalted grains (corn and rye) are steamed for about 3 hours in huge copper containers. Pure water, rich in minerals from the springs, is then added, thus forming a fermentable mixture called "mash". Unlike others, the Jack Daniel distillery uses to brew the old original "Sour Mash" process: part of the previously made product used to start another product or promote homogeneity. The master distiller uses at least a quarter of the "mash", rich in yeast, made the day before (vinasses) to start the fermentation process of a new "batch" to obtain a taste of continuity—the "slow mash" ferments for about 5 days. In the end, you will get a "Distiller's beer", containing about 10% abv (alcohol by volume).

The distillation process extracts the alcohol from the "Beer Distiller" and takes place by a continuous process in a copper column. The filtration process occurs through the "charcoal softening" process. The whole process takes ten days, during which the whiskey absorbs the essence of vegetable charcoal and gives it a characteristic taste and aroma. Maple charcoal is one of the fundamental elements as it is rich in calcium. Every drop of Jack Daniel's whisky coming out of the charcoal softening column is more delicate, less rough, and cleaner than when it entered. The end products are then put in barrels for aging.

Bottling takes place in new interior toasted American white oak barrels, which give the unique distillation qualities of flavor, aroma, and taste. While the whiskey ages in the barrel, the wood shrinks as the weather changes outside. In these phases, whiskey and wood interchanges properties and aromas. This mixture gives the whiskey a smoky, amber-colored flavor. The path to the bottling process is given by the master distiller, who, thanks to his experience, can understand when the optimal hardening time is reached. Jeff Arnett is the 7th Master Distiller decides when Jack Daniel is ready.

No matter what your opinion is on Jack Daniel's whiskey, there is no denying that it has a dedicated following. This is similar to the way musicians have fans who are devoted to them. Did you know that one of the most famous musicians of all time was also a big fan of Jack Daniel's? That's right, Frank Sinatra. He referred to the whiskey as "nectar of the gods" and was buried with a bottle of it. That's quite an endorsement from such a well-known figure.

To honor Frank Sinatra, the whisky brand created a collection which was named "Sinatra Select". The special barrels in which the liquor is aged are dubbed "Sinatra Barrels". They are carved from grooves into the charred oak barrels.

Jack Daniel's Sinatra Select whiskey features deep amber hues and notes of cola, vanilla, and caramel. However, some people acknowledged that the grooves introduce too much of a tannic flavor.

While Jack Daniel's Green Label whiskeys are matured towards the middle and on the bottom levels of the barrel houses, this Single Barrel Select is pretty much the opposite. All Jack Daniel Single Barrel whiskeys are only aged on the top floors of our barrel houses in Lynchburg, and they're also hand-selected by the master tasting panel here at the distillery. The barrels used before bottling the whisky are the standard charred oak barrels. Being on the top floor of the barrel house in Tennessee, the whisky is exposed to extreme climate situations hence, its unique taste.

To the nose, the whisky smells of brown sugar and bubblegum. The aroma of the single barrel whiskies is bold and rich sweet fruit with vanilla and caramel with a little bit of spice lying underneath.

On the palate, as soon as it crosses the tip of your tongue, the sweetness gives way to a big rich flavor that coats the entire mouth; you get a nice amount of spice, a nice amount of that toasted oak flavor that leads to a long lingering finish of spice with warm, rich caramel. It can be enjoyed as it is bottled or mixed with water as it brings out different tastes like oatmeal, mango tea, and butterscotch. The uniqueness in taste made people wonder that they believe that it had such an "Angelic touch" while aging in Jack Daniel's warehouse rafters.

Gentleman Jack is one of the more well-known brands in Jack Daniel's family. Gentleman Jack undergoes a 2 times charcoal mellowing process which is done through the 10-foot sugar maple charcoal tub to ensure the taste is as smooth as the bottle once the whiskey is removed from the barrel.

Gentleman Jack is soft and clean. A little bit of fruit adds floral character to the whiskey. The flavor is concentrated on the front half right of the tongue, where we taste those soft sweet fruits. Slightly floral touch of oak and caramel in the mid-palate and then a very smooth, clean finish. Just a subtle hint of spice anytime you're looking for a smooth whiskey, gentleman jack is always a great choice.